John Krasinski Admits It Was Love At First Sight With Blunt

John Krasinski knew his wife Emily Blunt was the woman for him the first time he met her. 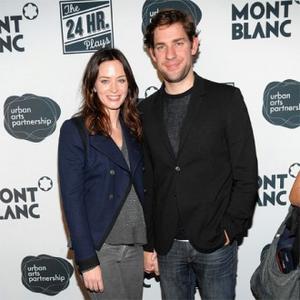 Emily Blunt's husband John Krasinski says it was love at first sight when he met her.

The 'Office' star - who married the British actress in an intimate ceremony at Italy's Lake Como in July 2010 - instantly knew he was going to "fall" for the 'Devil Wears Prada' star and told her the first time he ever spoke to her.

He said: "It was one of those things where I wasn't really looking for a relationship and I was thinking I'm going to take my time in Los Angeles.

"It's one of those things where as soon as you meet someone you kind of know."

When the 31-year-old actor finally decided he was going to propose to Emily, 28, he came up with the idea to do it before she realised she could find a better man.

During an appearance on 'The Ellen Degeneres Show', he joked: "I was like, 'I'm going to propose to her real fast before she wakes and is like, 'What am I doing? I can have anybody.' I was like, 'Just put on this ring. Shhh.' "

Emily recently confessed she is keen to have children with John at some point in the near future and thinks their family backgrounds will make them good parents.

She said: "John's well practiced. I grew up with a younger brother and sister who are quite a bit younger than me. So, at eight years old, I was sitting there with a baby, probably really p***ed off [because] he was puking on me."