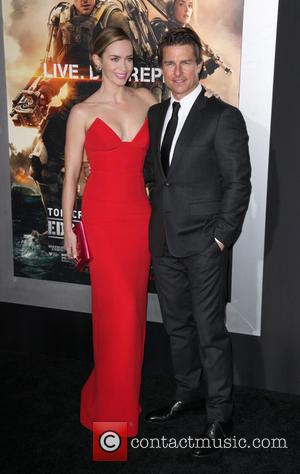 Actress Emily Blunt hid her pregnancy on the set of action movie Edge Of Tomorrow until her co-star Tom Cruise figured out the truth when she stopped taking part in hair-raising stunts.

The two screen stars play alien-battling soldiers in the new sci-fi movie, and shooting on the film wrapped before the British actress fell pregnant with her first child.

However, after conceiving, she had to return to shoot some additional scenes, and Top Gun star Cruise suspected something was amiss when he noticed Blunt was no longer keen to perform her own stunts.

She tells U.K. talk show host Graham Norton, "For some additional photography I was pregnant but it was still early and I wasn't really telling anyone. So Tom was confused as to why I wasn't engaging with all the stunts, as I was game when we did them originally. So I told him I was growing a human. He was so cute about it and protected me - he almost went overboard on helping me. In the end I had to say, 'Tom. I'm fine, I can do stairs!'"

Blunt gave birth to daughter Hazel, her first child with her husband John Krasinski, in February (14).