Emily Blunt Resplendent In Green For The Five Year Engagement 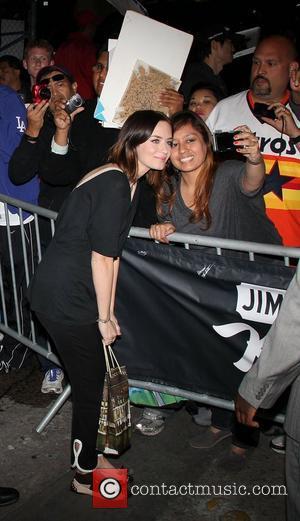 Emily Blunt arrived at the Tribeca Film Festival for the premiere of her latest film The Five Year Engagement, last night (April 19, 2012). She was looking resplendent in a black and emerald dress, with an intricate embroidery detail. The 1950s style gown was designed by Jason Wu and Emily teamed it up with emerald heels and matching earrings. The '50s-chic look was finished off with smoothed down, tied-back hair and retro flick of eyeliner.
The movie, from the producers of last year's hit, Bridesmaids, also stars Jason Segal, who opened up for the first time about his burgeoning romance with Michelle Williams. According to Marie Claire, when pressed on the matter, Jason said "I think we would just very much like to be happy. That's all I'm going to say about it." The movie opened the Tribeca Film Festival yesterday and a Reuters report today suggests the movie received a warm reception, "bringing some crowd-pleasing laughs and red carpet glamour to the event."
On the red carpet, Jason Segal said that The Five Year Engagement is "a lean mean comedy machine" whilst Emily described the differences between this movie and her other Tribeca appearance, Your Sister's Sister. "(The Five Year Engagement) is a big raucous comedy and the other one is a tiny movie all improvised, made for no money. We shot it in 12 days - they are very diverse, which at least is a good thing."