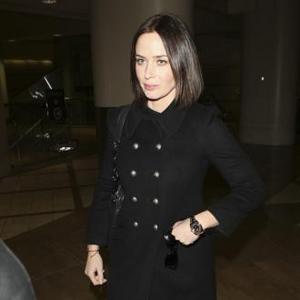 The 29-year-old actress was practising using rods with her 'Salmon Fishing in the Yemen' co-star when she hooked his pet pooch by mistake.

She said: ''We were staying in this castle and there's a pond and they were practising and asked 'Do you want to have a go?'.

''So I went down there and Ewan has this really sweet little dog called Sid, who looks like a little Lamb. On my first cast, I hooked his dog and almost launched this animal into the pond. The dog's fine.''

She also admits sex scenes with the 40-year-old 'Trainspotting' star were far from romantic, thanks to the fact they took place in an icy desert river.

Emily told The Scottish Sun newspaper: ''Oh my God it was awful. The scene called for a midnight swim on our Morocco set.

''What everyone forgot is that in the desert at night the temperature plummets. It was supposed to be a romantic and peaceful swim, but our teeth were chattering.

''Plus the water was only about two feet deep. We were scraping our knickers on the rocks.''

Now back on dry land, the 'Devil Wears Prada' star wowed in a Naeem Kahn strapless print dress at the Monday night (05.03.12) Los Angeles premier of her latest film.

But despite the rave reviews, Emily insists she prefers to spend the majority of her time in casual clothes.

She said: ''I kind of only want to wear jeans, boots and T-shirts, and it [was] really hard to get me in this dress.

''It kind of feels like dress up. I just prefer not to care about what I'm wearing most days, so that when I do have to care, I enjoy it.''