Emily Blunt heading Into The Woods?

Emily Blunt could be starring as The Baker's Wife opposite Johnny Depp and Meryl Streep in musical movie 'Into The Woods'. 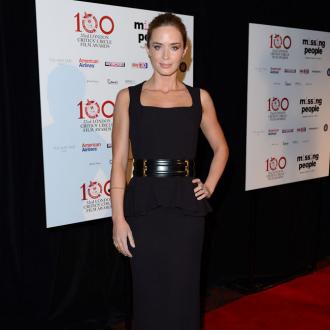 Emily Blunt could be heading 'Into The Woods'.

The British actress is close to signing a deal to star alongside Johnny Depp and Meryl Streep in Rob Marshall's new musical movie for Disney.

The 'Looper' star would be playing a baker's wife in the dark fairytale inspired flick, who is given the curse of barrenness by her wicked witch neighbour (Streep), but suddenly finds herself pregnant when the spell is lifted.

It had been rumoured James Corden is in talks to play her husband, but sources have denied speculation he has closed a deal, according to The Hollywood Reporter.

Hollywood heartthrobs Jake Gyllenhaal and Chris Pine have also auditioned for the parts of Cinderella's prince and Rapunzel's prince.

The movie is based on Stephen Sondheim and James Lapine's Broadway musical and sees the baker and his wife journey into the woods to find the witch. Along the way, the pair cross paths with a host of fairytale favourites including Cinderella and Jack from 'Jack and the Beanstalk'.

Depp is reportedly on board to play a ''hungry and sexy'' version of Little Red Riding Hood's big bad wolf.

'Chicago's David Krane is arranging the music while Lapine is adapting the script based on his musical book, supervised by producer John DeLuca.