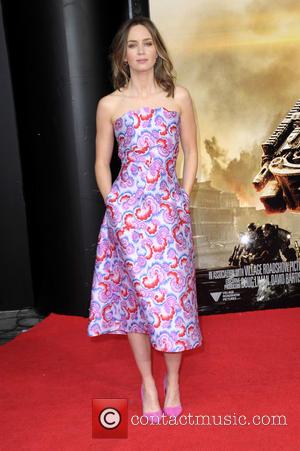 Picture: Emily Blunt - The world premiere of 'The Edge Of Tomorrow' at The IMAX London - London, United Kingdom - Wednesday 28th May 2014

British actress Emily Blunt "almost killed" Tom Cruise on the set of their new movie Edge Of Tomorrow when she accidentally slammed a car into a tree in the middle of a high-speed stunt.

The Devil Wears Prada star admits Cruise, a seasoned action man, was already uncomfortable not being in the driving seat for the scene, and he even tried to urge her to hit the brakes earlier to avoid a collision - but she refused to listen and ignored his pleas to bring the car to a halt.

She explains, "We were driving this crazy old car with a big trailer behind it and the stunt guy was like, 'Right, I want you to go really fast down the path and then take a really hard right and I want the trailer to swing out behind you, so get it moving and it can be kind of violent.' I was like, 'Great'. Tom Cruise is in the passenger seat - not his favourite place to be... He wants to be behind the wheel.

"We do the first take, it went really well. Stunt guy came over and he went, 'Ok, just do it again but kinda do it even faster.' I was like, 'No problem.'

Blunt, who had never filmed an action movie before, admits the shock of the accident caused her to burst into laughter and she ended up having to apologise to the actor for the close call.

She confesses, "When I first heard him say, 'Brake', in my head I went, 'Oh, shut up', you know? As if I knew more about stunt driving than Tom Cruise! I was just laughing (after the crash) and he was actually laughing and I told him, I said, 'I thought you were being so annoying when you told me to start braking and I apologise.'"