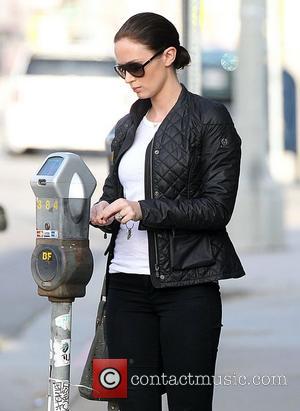 Emily Blunt was left red-faced and "mortified" on the set of upcoming movie Your Sister's Sister after her co-star Rosemarie DeWitt made a joke about her private parts.
The actress was in the middle of shooting a scene when the director interrupted and asked DeWitt, who plays her sister in the comedy, to poke fun at her.
Blunt was so surprised by DeWitt's genitals jibe that she began crying with laughter - and admits it was the first time she has ever shed "completely genuine" tears on film.
She tells Britain's Elle magazine, "I remember one scene when the director Lynn Shelton came up to Rosemarie and whispered in her ear, 'Say something that would really embarrass Emily.'
"So Rose told this story that involves my nether regions... Basically, her friend was going out with this boy and he'd said to her, 'I think you need to shave your pubic hair because it's really pouffey in your underwear,' and so we're doing this scene and Rosemarie just goes, 'Do you remember when Chris told you to shave your bush?'
"I went completely crimson, I was so mortified. For the first time ever on film, I cried with laughter and they caught it, they captured that golden moment when it was completely genuine."