Fresh from her stint on the Revival Tour last autumn, Emily Barker returns with her fourth Red Clay Halo accompanied album. Indeed, it's her sixth record in the last decade, and that can only be a good thing. Dear River is a folk album shrouded with country, giving it an odd sense of transatlantic homelessness. While it washes over you pleasantly enough with its hazy brand of nostalgia, it does feel a little like Barker is treading water - rather than pushing the boat out. Loosely based around a theme of water, the eleven songs here tell tales of wide-open landscapes, rivers, and oceans. Water acts as a metaphor for the passage of time, the security of home and as a barrier to a different life. While Barker has tried to make the material relatively timeless by deliberately avoiding specific locations or references, it's almost frustratingly vague and less personal because of it. For example, 'A Spadeful Of Ground' poses a number of questions: "What would you give for a spadeful of ground? Would you sail overseas? Would you almost drown?" While the track speaks of forced migration, conflict and the hope of a new world, what's not clear is whether Barker is referencing her native Australia, America or, indeed, other indigenous communities around the world.

Musically, Dear River treads a well-worn path but manages to avoid feeling derivative, while retaining a warm air of familiarity. The title track is a straight up, guitar-driven country track, with Gill Sandell being given ample opportunity to shine on accordion. Anna Jenkins' violin is well-highlighted throughout the record as well. Although Barker's voice is the focus of attention as the band shifts into a more melancholy mood for songs like 'Letters' or 'Sleeping Horses', their musical contributions elevate the material.

The vocal performance throughout Dear River shows why Barker is a performer worthy of more attention. She's no less engaging when she displays vulnerability or defiance. Her voice lacks any hint of an accent, adopting instead the approach that PJ Harvey seemed to perfect in the early 2000s with Stories From The City. Barker even gets close to sounding like she's channelling Harvey on 'Everywhen'. However, it is noticeable that none of the eleven songs here pushes the band or Barker's sound forward. It's certainly a comfortable listen; the album bookends itself with tales of water leading from, and eventually back to, home, but the record doesn't really shed any new light on the nostalgic themes and music it presents.

During the chorus to 'Letters', Barker sings: "We hold on to your words, we listen for years". It's a sentiment that seems to encapsulate her approach to Dear River. She wants to make these songs timeless and relevant, while looking back to the past. But, in doing so, she falls a little short of her ambitions by making them a little ambiguous as well. The record is a welcome addition to her growing back catalogue, but it probably won't be one that floats to the top of the pile in years to come. 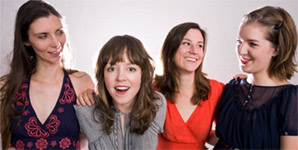