'Game of Thrones' actress Emilia Clarke is stunned to have been nominated for a Primetime Emmy Award for her role in the show. 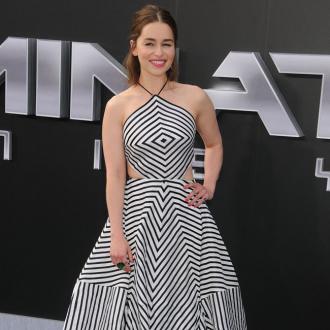 Emilia Clarke ''wasn't expecting'' to be nominated for a Primetime Emmy award.

The British actress is among the nominees for Outstanding Supporting Actress in a Drama Series for her portrayal of Daenerys Targaryen in 'Game of Thrones' and is overjoyed the show has received a further 23 nods, including one for her co-star Lena Headey in the same category.

She said: ''From across the pond, thank you with all my heart. I honestly was not expecting this.

''I am most proud that the show is being recognised by the Academy in such a profound way, especially in such a wonderful year for television.

''This is entirely a testament to the dedication of David, Dan, HBO and the entire cast and crew of 'Game of Thrones'. If you're going to be a mother of teenage dragons, trust me, these are the people you want by your side.''

She said: ''This is truly the most amazing surprise! I am so lucky to have been a part of 'Mad Men' and to have played such a wonderful character like Peggy.

''Being recognised like this when there are so many other ridiculously talented women on TV right now is incredibly humbling. I am ecstatic for the rest of my 'Mad Men' family who also got recognised and can't wait to celebrate with them in September!''

Meanwhile, 'Better Call Saul' star Bob Odenkirk was ''blown away'' to learn he had been nominated for Outstanding Lead Actor in a Drama Series.

He said: ''I am truly blown away at this nomination. I am grateful to Vince, Peter, and the writing staff.

''I also have to thank my amazing cast mates Jonathan Banks, Michael McKean, Michael Mando, Patrick Fabian and Rhea Seehorn because everyone raises everyone's game. I promise to wear a tux to the ceremony. And of course thank you to the Academy!!!!''

Away from drama, talk show host Jimmy Fallon is ''honoured'' that 'the Tonight Show' is in consideration to win Outstanding Variety Talk Series.

He quipped: ''So honoured to be nominated for an Emmy. I love being part of the American tradition of late night comedy....that people watch the next day on their phone after a brief yogurt commercial.''