Review of This New Day Album by Embrace 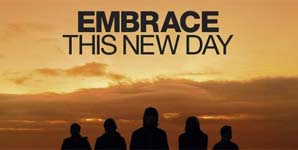 Embrace's 2004 "Out Of Nothing" record couldn't really have been any more appropriately titled, for they made one of the most astonishing comebacks of the music industry in recent times. Their third album, "If You've Never Been", seemed to signal the end of the quintet, as they lost their record deal and disappeared off the radar. Now very much on the ascendancy, they release their fifth album, which sees them once again teaming up with producer Youth.

Those who saw the quintet on tour last year may recognise opening number "No Use Crying", one of a number of tracks which have previously been tested live. An up-tempo indie anthem, it is not too dissimilar to previous hit "Ashes", and shares the same positive vibes. Lead single "Nature's Law" is classic Embrace, a big ballad with a fabulous piano hook and Danny McNamara at his emotional best, and Mickey Dale's keyboard skills also form the basis of "Celebrate". A brooding and dynamic track with some shimmering guitars and a huge chorus, it exemplifies the benefits of the band writing their music as a unit for the first time. The true highlight however is the stunning "Target", which features some great lyrics, warm melodies and sweeping strings, and perhaps McNamara's strongest vocal performance to date.

Bordering close to soppy, "I Can't Come Down" is a ballad with touchingly honest lyrics, and the kind of chorus that gets share prices rising in the lighter fluid industry. Beyond this, the band become much more experimental that has been witnessed in their recent history. "Sainted" has a grittier texture than the band usually produces, while "Exploding Machines" pulses to a crescendo. "The End Is Near" is a successful move similar to U2's recent work, but most interesting is "Even Smaller Stones". Another track that has been played live before, it's more menacing than anything else the band has released, both lyrically and musically. It epitomises the confidence that is now flowing through Embrace, who with this album are signally an intent to expand their sound – and judging by the tracks here, it looks as if their future is very promising.