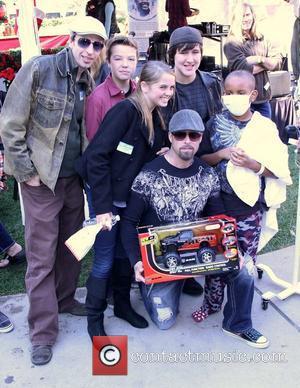 Elvis Presley's daughter Lisa Marie is set to release her first album in seven years - with a little help from critically-acclaimed producer T Bone Burnett.
The singer has been quietly working on her third album Storm and Grace and was thrilled when in-demand hitmaker Burnett agreed to produce and play on a few tracks.
She says, "Nothing was planned or contrived in any way and out of it came a very organic record that was always inside of me and that I am incredibly proud of. It was a dream come true and such an honour when T Bone liked the songs and produced and played on the record."
And Burnett insists music fans will be impressed by what Presley has to offer.
He says, "When songs from Lisa Marie Presley showed up at my door, I was curious. I wondered what the daughter of an American revolutionary music artist had to say.
"What I heard was honest, raw, unaffected and soulful. I thought her father would be proud of her. The more I listened to the songs, the deeper an artist I found her to be. Listening beyond the media static, Lisa Marie Presley is a Southern American folk music artist of great value."
Storm and Grace, the follow-up to 2005's Now What, will be released in May (12).