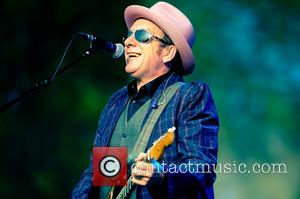 The star first released his protest song, Tramp The Dirt Down, in 1989 but he has revived it since Thatcher's death in April (13) and he performed it during his recent show at Britain's iconic music festival.

The decision to resurrect the track has prompted a backlash, with critics accusing Costello of insensitivity towards Thatcher's grieving relatives as the tune includes the line, "I'll stand on your grave and tramp the dirt down".

However, the singer insists he doesn't feel bad about playing the track.

He tells Britain's The Independent, "I felt I wanted to revisit the song regardless of the offence it gives to people who deify her. We sing the song from our point of view and other people have another view. Nobody shot anybody because of it. I don't feel vindicated. I didn't personally kill her."

However, Costello insists he took no pleasure in Thatcher's struggle with dementia before her death, as his own father battled the condition. He adds, "I genuinely don't wish that on my worst enemy and that's what I said every night when I introduced the song."