Sir Elton John in the studio with Clean Bandit

Sir Elton John has been making music with Clean Bandit's Jack Patterson and revealed he's struck up a ''friendship'' with the musician who he described as a ''lovely guy''. 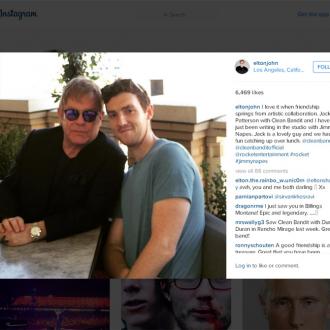 The 'Candle in the Wind' hitmaker has taken to Instagram to praise ''lovely'' Jack Patterson from the Grammy Award-winning group, revealing he's been working with the musician in the studio alongside songwriter Jimmy Napes who co-wrote Sam Smith's worldwide hits 'Stay With Me', 'Lay Me Down' and 'I'm Not the Only One'.

Alongside a photo of himself with Jack, he wrote on Instagram: ''I love it when friendship springs from artistic collaboration. Jack Patterson with Clean Bandit and I have just been writing in the studio with Jimmy Napes. Jack is a lovely guy and we had fun catching up over lunch.''

The group originally met the iconic musician at the Ivor Novello awards in London earlier this year and were excited at the time as they were surprised he even knew who they were, despite the fact they topped charts around the world with their Jess Glynne collaboration 'Rather Be'.

Band member Grace Chatto told BANG Showbiz: ''Elton John sang some of 'Rather Be' to me which was amazing! I wouldn't say he's an obsessive fan, but he said he really likes the music and yeah, that was really exciting.''

And it's not the only superstar Jack has been hitting the studio with as he's also been making music with 'Crazy In Love' hitmaker Beyonce.

Speaking about being in the studio with the star, he gushed: ''It was insane. Nothing happened in terms of I don't know if there is going to be anything concrete in terms of music, unfortunately. But yeah, it freaked me out.''