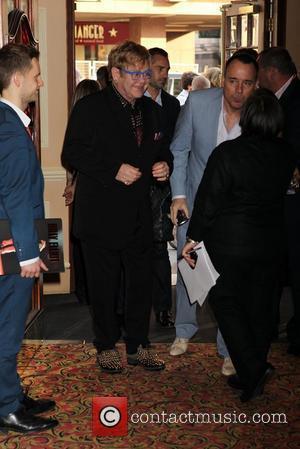 Sir Elton John battled illness on Wednesday (30May12) to congratulate the cast of London's Billy Elliot stage show on its 3000th performance.
The Rocket Man, who composed the tunes for the musical, was recently forced to scrap a number of concerts in Las Vegas to recover from a serious respiratory infection, but he put on a brave face to join director Stephen Daldry and writer Lee Hall in celebrating Billy Elliot the Musical's continued success.
The cast and crew of the West End production delivered its landmark show for a gala audience at the Victoria Palace Theatre on Wednesday, with the stars delivering a special finale number to a roaring applause.
The famed show, based on the award-winning film of the same name, premiered in 2005 and follows the titular character as he struggles to realise his boyhood dream of becoming a dancer despite the odds. To date, more than eight million people have taken in the spectacle, including actors Brad Pitt and Angelina Jolie, Hugh Grant and Nicole Kidman and Queen Elizabeth II.
Sir Elton is set for a busy couple of days - he is due back on stage over the weekend (02-03Jun12) and he'll sing at the Queen's Diamond Jubilee concert on Monday (04Jun12).