Sir Elton John has joked that he will be ''busking'' outside Prince William and Kate Middleton's wedding in April. 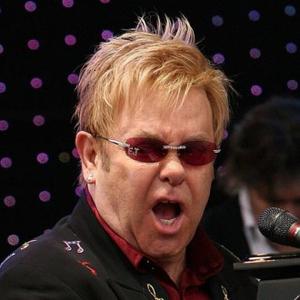 Sir Elton John will be "busking" outside the Royal Wedding.

The legendary singer - who performed 'Candle in the Wind' at the funeral of Prince William's late mother, Princess Diana, who was a close friend of the star - joked that the only way he will be putting on a show at the nuptials of William and his fiancee Kate Middleton is if he is "busking" outside.

He said: "I probably will be playing there in the sense that I'll be outside busking."

However, it is unlikely the 'Sacrifice' hitmaker will have seen much coverage of the royal wedding - which is to be held on April 29 2011 - as he revealed he doesn't own a mobile phone, computer or iPod.

Sir Elton added to BBC Radio 2: " I don't have a iPod or a mobile phone or a computer. I do have a quarter of a million pairs of glasses but I don't even have a mobile phone! If people want to get hold of me they can.

"The internet doesn't interest me either apart from getting my sports scores. I have a computer in the Los Angeles office but literally all I check is the news and the sports scores.

"I feel my life is full enough already and there's enough going on. I prefer writing personal notes and writing things down. Being on a Blackberry all the time would drive me crazy."