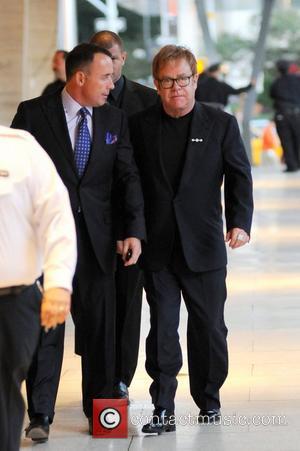 Sir Elton John and Justin Timberlake paid a late night visit to the Sexyback hitmaker's New York restaurant on Wednesday (26Oct11) to attend a surprise show by OneRepublic.
The group's singer/songwriter Ryan Tedder recently signed a franchise ownership deal with Southern Hospitality Bbq owners, and he and his bandmates decided to play an intimate gig at the Hell's Kitchen branch in Manhattan this week - with a handful of celebrity fans in the audience, including New York Yankees baseball star Derek Jeter and soul singer Maxwell.
And Tedder was surprised to learn that Elton was one of his biggest admirers.
In a series of posts on Twitter.com, Tedder writes, "did short gig last nite (southern hospitality), ended up in 30 min conversation w (with) Elton John who was there - he knew all our songs - Still kinda tripping - the man just Loves music,we're honored he attended -Thx 2 (thanks to) Elton & David, Justin Tmb (Timberlake), Derek Jeter, Maxwell..."
Timberlake has also used the Southern Hospitality restaurant to showcase his music - he performed at the same venue in August (11) with his new hip-hop/rock group FreeSol.