Sir Elton John Is Considering Asking Queen Elizabeth II To Step In And Help His Ongoing Fight To End The Global Aids Crisis. 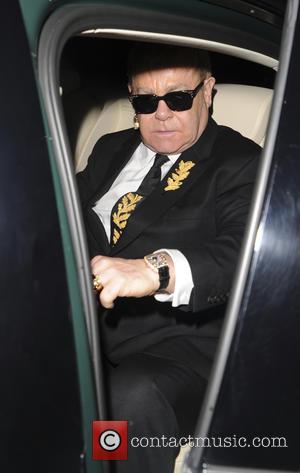 The Tiny Dancer star has announced a new partnership between his Elton John AIDS Foundation and the U.S. government's President's Emergency Plan for AIDS Relief (PEPFAR).

Both organisations will contribute $5 million (£3.1 million) to help sufferers of HIV and AIDS in countries which have little support for the lesbian, gay, bisexual, and transgender (LGBT) community.

The veteran musician held a star-studded launch for the initiative in London on Wednesday night (04Nov15), and he says of the scheme, "We will now partner to expand support to thousands in the LGBT community across multiple countries. This is not favouritism - it is pragmatic and compassionate. We cannot end AIDS unless we protect this group. We are deeply honoured to be working with PEPFAR on this...

"What a blessing it is to see now a U.S. administration showing extraordinary leadership in not only recognising LGBT rights at home, but reaching out to the most vulnerable LGBT communities around the world with dignity and life-saving support."

Sir Elton has also revealed he hopes Queen Elizabeth II will take steps to repeal anti-gay laws in Commonwealth countries, and he is prepared to address her directly in a bid to gain her support.

"These laws come from... the Commonwealth. These laws can be changed very easily by the Queen saying, 'Change the law.' I haven't approached her about that yet," he tells CNBC.com.

"If the worst comes to the worst, one has to, yeah (I will approach her). These are old laws from the British Commonwealth, I mean these can be changed. And so the Queen could do that with one wave of her hand."

News of his plan to contact the Queen comes as Sir Elton prepares to meet with Russian President Vladimir Putin in a bid to convince him to change anti-gay laws there.

"I feel very honoured that he wants to see me and he's put the olive branch out and it's essential that I do go over there and just put my foot in the water and see what we can do (to) change the situation for LGBT people in Russia," he adds.