Elton John advised Fall Out Boy to ''p**s people off'' on 'Save Rock And Roll' in order to know if they're doing the right thing with their songs. 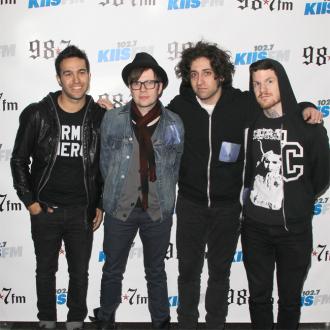 Elton John advised Fall Out Boy to ''p**s people off'' on 'Save Rock And Roll'.

The legendary singer appears on the 'Dance, Dance' band's new album, and they knew they were doing the right thing with their songs when he said they would cause upset.

Singer Patrick Stump explained: ''Elton John sings on the song 'Save Rock and Roll' and going in there with him [to record] I was a little bit concerned what he was going to say about it

''But he loved every part of it and that was reassuring like, 'Okay we're doing the right thing.'

''He was like, 'You're going to p**s off a lot of people and you should totally p**s those people off.''

Fall Out Boy - which also includes Pete Wentz, Joe Trohman and Andy Hurley - went on hiatus to focus on side projects from 2010 until making 'Save Rock And Roll' in secret at the end of last year, and Patrick says it gave them a new perspective to work from.

He added: ''It was [good], because we had like the time off to go do other projects and work on our abilities and selves and whatnot and kind of come back.

''It was more confident, better people and we now have more trust within each other.''