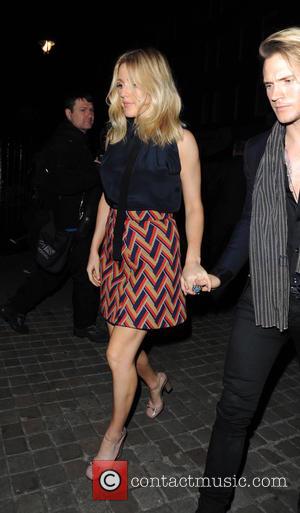 The Lights singer is fuming about a recent poster campaign launched by officials in the affluent borough of Kensington and Chelsea which urges Londoners not give money or food to the homeless.

It follows a similar campaign by politicians in Hackney, east London, and Ellie is urging officials to rethink their stance to show more compassion to those on the streets.

"First it was Hackney council and now Chelsea and Kensington council have told people not to give food or money to homeless people," she tells Britain's The Guardian newspaper.

"They say the money will fund something it shouldn't, but actually that's just the act of kindness, the communication that could save someone's life. It's a ridiculous campaign and I completely condemn it."

Ellie has also slammed the placing of security systems, dubbed 'anti-homeless' spikes, around buildings across the British capital in a bid to keep those who are down on their luck out of doorways.

"We see the spikes that have been put up, treating homeless people like they're pigeons - it's disgraceful," she exclaims. "I think it is the lowest thing these councils can do. It is an example of the lack of compassion. There are 7,000 people on the streets every year in London and for a city that's thriving, that's shameful."

She goes on to voice her support for Jeremy Corbyn, the new leader of Britain's opposition Labour party, and wants to schedule a meeting with the staunch vegetarian politician.

"He is bringing some compassion back into politics," Ellie adds. "I feel good about that. I'd really like to meet him and talk things over with him... As soon as I found out he didn't eat meat it made me interested in him because I think it automatically shows an awareness of the world and it's a type of compassion that I can relate to. It's a sign that someone has escaped that ignorance of where their food comes from, and that's really important."