Ellie Goulding has sparked further speculation she has recorded the 'Spectre' theme after posing outside London's Abbey Road Studios where it tends to be recorded. 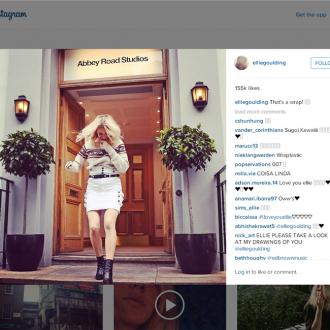 Ellie Goulding has sparked further speculation she has recorded the 'Spectre' theme.

The 28-year-old singer has posted an image of herself leaving London's famous Abbey Road Studios on Instagram, once again igniting rumours she will sing the theme tune to the upcoming Bond movie, as the tracks are typically recorded at the studio.

Alongside the photo, she wrote: ''That's a wrap!''

Several commenters were quick to make the association between the location and the upcoming Bond movie, which will be released in October.

But another Instagram user doubted whether the 'Love Me Like You Do' hitmaker would be the correct choice for the song.

Rumours the star had been chosen to sing the theme were started earlier this month when Sam Smith revealed he had ''heard Ellie Goulding was going to do it'' and she fuelled rumours by writing ''Live and let die'' on Twitter - the title to the 1973 movie and accompanying theme, sung by Sir Paul McCartney.

However, Ellie may have been recording her third studio album as she recently said she was desperate to release it before the end of the year.