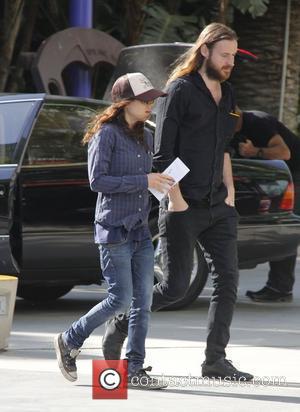 Picture: Ellen Page with a male companion arriving at the Staples Center for game six LA Kings vs. New Jersey Devils for the Stanley Cup Finals...

We can't imagine anybody wanting to harm the Juno actress Ellen Page, but according to Tmz, the 25 year old has been receiving death threats on Twitter. Apparently, the threats have been so severe that Page has been forced to turn to the Los Angeles Police Department to investigate. Tmz have obtained a copy f the search warrant that the Lapd have sent to the headquarters of the social networking site, requesting information regarding two accounts that have been used to threaten Ellen.
The warrant includes details of some of the threats that have been sent to Page and used to threaten her, including one which read "I'm going to murder Ellen Page. She's dead." Another said "Ellen Page if you continue to date Alexander Skarsgard I will K-1-l-l you in public in the next year ... Be it in a club, at a game, in a restaurant, or when you're signing autographs." The tweets have since been removed, but the investigation into who sent them to the actress will still go ahead, regardless. Unfortunately, the threats haven't been confined to Twitter, either, giving Ellen even greater cause for concern. The organisation that runs the LA Film Festival received a creepy phone call from someone saying that they intended to go to the festival - which was screening Page's movie 'To Rome with Love' - and "kill Page." Scary stuff for the young star.
Ellen's not the only young celebrity to have received death threats recently, either. Rebecca Black and Selena Gomez have both had people threatening to bump them off, too.