A 'selfie' organised by Ellen Degeneres and taken byt Bradley Cooper caused twitter to crash after it had over 1.1 million retweets in just half an hour. 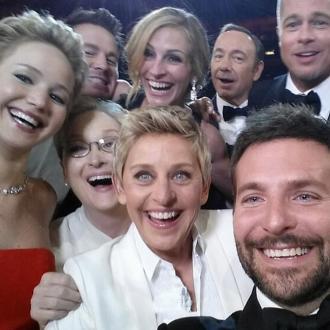 A 'selfie' picture organised by Academy Awards host Ellen Degeneres, who handed her phone to Bradley Cooper to take the photo, became the most retweeted post ever on the social networking website, amassing over 1.1 million reposts in just half an hour.

As well as Ellen and Bradley, Jennifer Lawrence, Jared Leto, Meryl Streep, Julia Roberts, Kevin Spacey, Brad Pitt, Angelina Jolie and Lupita Nyong'o and her brother Peter all crammed into the photograph, much to the excitement of fans.

However, the website was then hit by technical difficulties which prevented further retweets, and Ellen told the audience at Hollywood's Dolby Theatre: ''So this is true. We just crashed Twitter. We got an email from Twitter, and we crashed and broke Twitter. We have made history. See, Meryl, what we did? You and I? It's amazing, we really just made history. It's fantastic.

''It's back up again and it has the most retweets ever--and we're all winners tonight, that's what it means, that's what I was trying to say early on.''

However, Ellen poked fun at 'American Hustle' star Bradley insisting they could have crammed even more stars into the photo if his body was different.

Posting the photo, she wrote: ''If only Bradley's arm was longer. Best photo ever. #Oscar.''

The 56-year-old star was a hit as Oscars host, goading the audience with gentle humour.

She later added: ''Between all the nominees here tonight, you've done over 1400 films, 1400 films, and you've gone to a total of six years of college.''