Finding Nemo 2 has been confirmed, and it will be called Finding Dory – the story of the rather forgetful yet lovable blue fish, voiced by Ellen Degeneres, who has spoken about the new movie.

“I’m not mad it took this long. I know the people at Pixar were busy creating ‘Toy Story 16.’ But the time they took was worth it,” she explained. “The script is fantastic. And it has everything I loved about the first one: It’s got a lot of heart, it’s really funny, and the best part is—it’s got a lot more Dory.” Andrew Stanton, who also made Finding Nemo, John Carter and Wall-E, will direct the film. He said: "Finding Dory takes place about a year after the first film, and features returning favourites Marlin, Nemo and the Tank Gang, among others. Set in part along the California coastline, the story also welcomes a host of new characters, including a few who will prove to be a very important part of Dory’s life".

Disney have confirmed that Finding Dory is set for cinema release on November 25th 2015. Finding Nemo netted $380,843,261 at the domestic box office and an additional $540,900,000 at the international box office for a total worldwide gross of $921,743,261, an impressive feat for any film, so the pressure will be on DeGeneres and co to deliver once more. 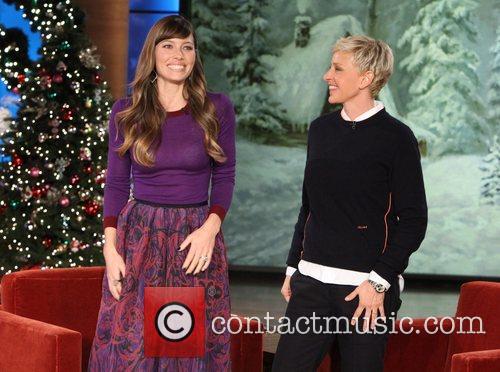 DeGeneres with Jessica Biel on her show