Ellen Degeneres received the Mark Twain Prize for American Humour at a special tribute ceremony on Monday (22.10.12) where she was feted by celebrities including her wife Portia De Rossi. 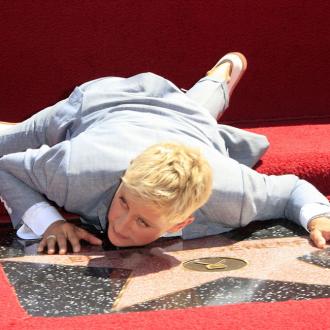 The 54-year-old talk show host was feted by a number of celebrities including her wife Portia De Rossi, chat show host Jimmy Kimmell and 'The Office' star John Krasinski at the event which was held at the Kennedy Center for the Performing Arts in Washington DC.

Ellen joked: ''I'm flattered. It's fantastic. Of course I think, 'What took so long?'''

A proud Portia said: ''I am very, very proud of Ellen. She's not only the funniest person I know, but she's such a good person.''

The award is given to people who have an impact on society in the way Samuel Clemens - better known as Mark Twain - did as a social commentator and satirist.

Ellen's celebrity supporters all pointed out that despite fame and recognition, she has managed to stay grounded and ''kind''.

Musician Jason Mraz said: ''She's the same backstage as she is on stage, and that's why you love to watch her.''

'The Office' star John added: ''She's one of those people where you feel she's your friend.''

Comedian Jimmy said: ''This is the only time I've ever missed a show for anything. Except when I had my appendix taken out.

''She's very genuine and she makes it look easy and it's not easy.''