Ellen Degeneres has been named the most powerful gay celebrity in the US in Out magazine's annual Power List poll. 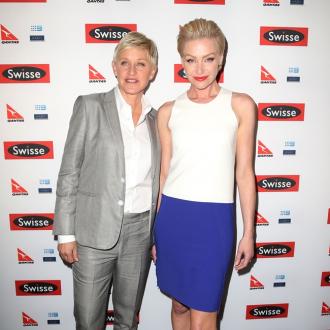 Ellen Degeneres has been named the most powerful gay celebrity in the US.

The 56-year-old talk show host, who is married to 'Arrested Development' actress Portia De Rossi, secured the top spot on Out magazine's 2014 Power List, an annual ranking of the most influential LGBT (Lesbian, Gay, Bisexual and Transgender) voices in American culture.

Announcing the news on its website, the publication stated: ''Everybody loves Ellen, and that's one of the reasons she's regained the top spot. In March, 'The Ellen DeGeneres Show' shattered its own 10-year ratings record in the episode that immediately followed her Academy Awards hosting gig, which also gave the awards its best ratings since 2004. And her star-studded Oscars selfie almost shut down Twitter when the pic became the most retweeted ever.''

The 'Inception' star, 27, previously admitted she was scared to open up about her sexuality for a long time.

She said: ''I suffered for years because I was scared to be out.

''My spirit suffered, my mental health suffered and my relationships suffered.''