Ellen Degeneres Gets Hollywood Star: People Are Gonna Walk All Over Me! 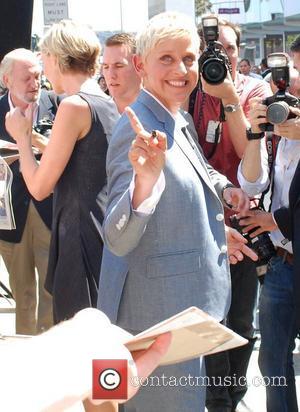 Picture: Ellen DeGeneres signs autographs after being honored with a star on the Hollywood Walk of Fame Los Angeles, California - 04.09.12

Ellen Degeneres has been awarded her own star on the Hollywood Walk of Fame. The popular U.S. chat show host received the honour just as she launches the tenth season of her daytime show. She was accompanied by her mother - 82 year-old Betty - and her wife, the actress Portia De Rossi. The ceremony was also punctuated by speeches from Ryan Seacrest and Jimmy Kimmel.
Accepting the award, Ellen joked "it's amazing because I spent my entire career trying to conduct myself a certain way and making sure that no one walks all over me, only to get to a point that people are going to walk all over me." DeGeneres has made a successful transition from sitcom star (she starred in Ellen and The Ellen Show) in the mid to late 1990s, to becoming one of America's most-watched daytime chat show hosts. In 1997, DeGeneres publicly came out as a lesbian, on Oprah Winfrey's chat show. She has since gone on to win a total of 38 Daytime Emmy Awards and has been chosen to present both the Oscars and the Grammys.
Jimmy Kimmel spoke of Ellen with great respect during his speech, remarking on the decorous manner in which she conducts herself, when faced with prejudice regarding her sexuality: "When unenlightened people threatened to boycott her show or her sponsors simply because Ellen is honest about who she is, she doesn't belittle or attack them like I would," said Kimmel, also a talk show host.