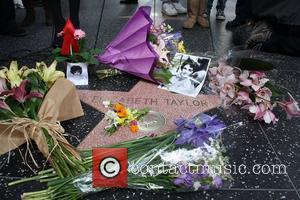 Picture: Elizabeth Taylor's Hollywood Walk of Fame star is adorned with a floral memorial to mark her passing at age 79 Los Angeles, California - 23.03.11

Dame Elizabeth Taylor broke down in tears when she learned of her ex-husband Eddie Fisher's death from his daughter Carrie Fisher.
The former couple sparked outrage in the 1950s when the singer left his wife Debbie Reynolds for her pal Taylor - they went on to exchange vows but the five-year union broke down and both went on to re-marry.
It has now been revealed that Taylor was overcome with grief when Fisher passed away last year (10) - and his daughter Carrie admits she was touched by the actress' outpouring of emotion.
She has paid tribute to Taylor, who died on Wednesday (23Mar11), praising her "sense of family" and confessing: "Ultimately I became friends with her".
Fisher tells Piers Morgan Tonight, "(Her death is) very sad. I lost my father not that many months ago. I called Elizabeth to tell her when he passed and she cried, which I thought was incredibly sweet.
"She had a sense of family even to someone she had been married to so long ago."
And the Star Wars actress has fond memories of her former stepmother, adding, "She loved a good time. I remember one time she pushed me in the pool after establishing that I wouldn't pull her in afterwards, and she used to have these egg hunts at her house for all the children. She seemed to love doing stuff like that.
"One night we went on a double date, it was Elizabeth and Michael Jackson, and Shirley MacLaine and myself. No one noticed Shirley and I. Michael had given her earrings and a necklace that night and I remember how happy she was."