Screen legend Elizabeth Taylor will wear a jewel-encrusted turban worth over £2 million at her wedding to talent agent Jason Winters, according to designer Keith Holman. 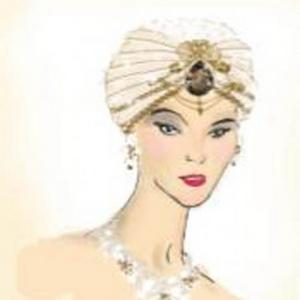 Elizabeth Taylor will wear a jewel-encrusted turban worth $3 million at her wedding.

The screen legend is splashing out the huge sum on the headdress for her upcoming union to her long-time companion Jason Winters - a Los Angeles-based talent agent who, at 49, is 29 years younger than the 78-year-year-old retired actress.

The bridal crown is adorned with a precious 30 carat centre stone and two huge 40 carat round yellow canary diamonds and has been designed by Keith Holman - who previously worked with Bill Whitten on a number of stage outfits for Michael Jackson during his 1980s heyday.

Holman exclusively told BANG Showbiz: "There is a 30 carat centre stone, two yellow canary diamonds 40 carat round and the headpiece is partially platinum. I'm currently working with the jeweller, Christian Tse, based in Pasadena, and they do private labelling for some of the biggest jewellers in the world and they are making the turban for me, they are adding the stones on. It's taking about 12 artists to work on this piece and it will have a silver and gold fabric and is being hand-woven. It's absolutely gorgeous and a one-of-a-kind piece, never to be duplicated."

As well as the turban, Holman is also designing Taylor's wedding dress, which will be an extravagant kaftan to match the luxurious headwear.

Jacqueline 'Jackie' Stallone - who will be attending the wedding ceremony and is close friends with Keith and Elizabeth - revealed: "Keith is doing the dress as well. I imagine it will be some sort of a kaftan. It's not quite white, it's going to be a flesh colour.

"But if you see her turban, I mean the stones, the jewels, are amazing. She loves stones and $3 million means nothing to her."

The wedding is due to take place later this year, and will be attended by around 200 guests, however, the venue is being kept secret.

Those lucky enough to be invited will only find out by telephone call as no invites are being sent out so to keep it under wraps.

Jackie revealed to BANG Showbiz: "Invitation will be by phone call and word-of-mouth. It's not going to be one of these formal things. To have the kind of affair they're putting together it's got to be like that. It will be a garden party, but apart from that I don't know where it will be."

Elizabeth's own Los Angeles home has not been completely ruled out as possible venue.