Elizabeth Hurley's son wishes his mother had blonde hair instead of brunette locks. 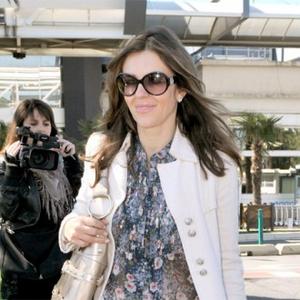 Elizabeth Hurley is considering dying her hair blonde to please her son.

The actress' eight-year-old son Damian has been quizzing his brunette mother on why she doesn't have "yellow" hair leading her to question the shade of her locks.

She wrote on her twitter account on Wednesday (15.09.10): "My son just asked me why God didn't give me yellow hair. I may run to my colourist so when he gets back from school I can say God performed a miracle."

Apart from contemplating overhauling her style, Elizabeth has been spending time relaxing at her farm in Gloucestershire, South West England.

She said in another tweet: "Just watched the sun rise. Very humbling. Best time of day to see things in perspective."

The 45-year-old star has previously revealed Damian - her child with ex-lover Steve Bing - constantly begs her to resurrect her movie career so he can gain experience on a film set to help fulfil his own showbiz dreams.

Elizabeth - who is married to businessman Arun Nayar - said: "Damian adores being photographed - in fact he likes anything to do with showbusiness.

"He's written his first screenplay called 'Escape!' and many pop songs which he performs on the dining room table, singing into a hairspray can.

"He spends hours trying to persuade me to do movies again so I can take him out of school to be tutored in my trailer. Needless to say, this is not going to happen."