Elizabeth Banks Scores Three 2015 Hits, And 'Love & Mercy' Is Her Best Yet

Elizabeth Banks is the buzz at the moment with her stellar 'Love & Mercy' performance.

At age 41, Elizabeth Banks is having a great year. Not only did she make her directing debut with Pitch Perfect 2 and steal all her scenes in Magic Mike XXL, but she's getting the best reviews of her career for her performance as Brian Wilson's wife Melinda in the biopic Love & Mercy. 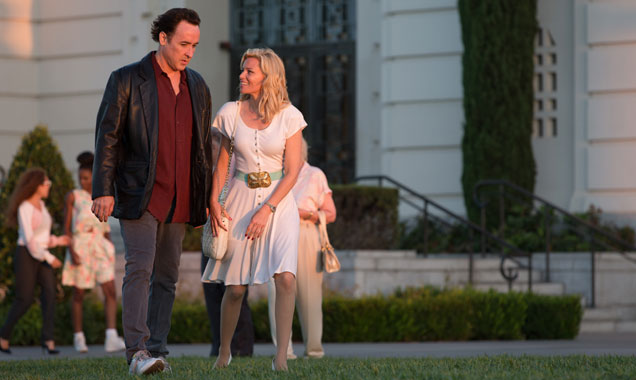 "I've always felt like I was a character actor, trapped in a leading lady's body," she laughs. "I might not look it, but I'm tougher than most of my colleagues. I know all the tricks!"

An outspoken campaigner against ageism and sexism in Hollywood, she moved behind the camera simply to help break the system. "I started producing and directing because I knew I had more to offer an industry that clearly didn't expect too much from me," she says. "Looks and age don't play any part in directing a movie. It makes for a refreshing change."

And Banks has yet another iconic role coming up this year, as Effie Trinket in the final Hunger Games movie, Mockingjay Part 2. New photos have been released of her this week in costume with friend and costar Jennifer Lawrence, who led the cast to an appearance at San Diego Comic-Con.

More: Watch the trailer for 'The Hunger Games: Mockinjay - Part 2'

"Not a lot of ladies get to direct movies, and not a lot of ladies get to be in movies and I like to say that even Jennifer Lawrence, who's the most famous actress in the world, gets not one, but two male costars," says Elizabeth of Hunger Games' leading men Josh Hutcherson and Liam Hemsworth. She also famously told Lawrence, "You're a guy's girl. Like, you basically have a penis. You have a man's career now!"

And Lawrence returned the favour, describing Banks as "a force of nature, but one you actually like to be around".

For her part, Lawrence is sad to see The Hunger Games draw to a close, noting that playing Katniss Everdeen has changed her. "Katniss is brave, and I'm an actress," she laughed. "I would hope that a little of Katniss has rubbed off on me."

She said that wrapping up production brought the cast members even closer together. "There's no way of saying this that doesn't start rumours," Lawrence said of the last day of filming, "but that night we held each other and slept like puppies."

Elizabeth Banks: I could perform an abortion after my latest role

Elizabeth Banks is 'very open' with her children about sex