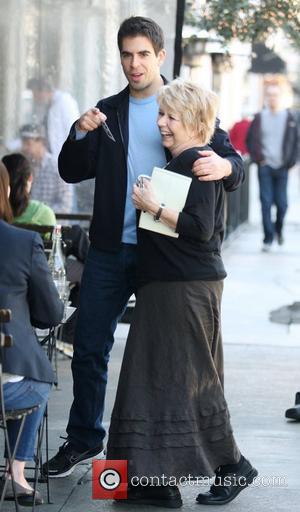 Picture: Eli Roth having lunch with a friend at Joan's on Third in West Hollywood Los Angeles, California, USA - 01.03.11

Filmmaker Eli Roth is urging fans to sign an anti-censorship petition to support a Spanish film festival boss who is in trouble for screening a controversial movie featuring child rape.
Prosecutors in Barcelona have lodged a complaint against Sitges International Film Festival director Angel Sala for showing A Serbian Film at the event in October (10).
Sala stands accused of screening child pornography by including director Srdjan Spasojevic's movie, which contains two rape scenes involving children.
Roth has taken to his Twitter.com page to condemn legal action taken against Sala, asking followers to sign an online petition which defends him.
He writes, "A horrible situation is happening to the director of the Sitges Film Festival in Spain. He may be jailed up to 1 year for showing a film.
"A prosecutor is going after him for showing A Serbian Film. Horror fans - please make noise about this. It's dangerous for all filmmakers.
"If Angel Sala does in fact go to jail festivals will stop showing any controversial or edgy films and censorship will win... It sends a terrifying message to festivals.
"Whatever you think of A Serbian Film a film festival director should not spend a year in jail for exhibiting a filmmaker's work. Please sign."