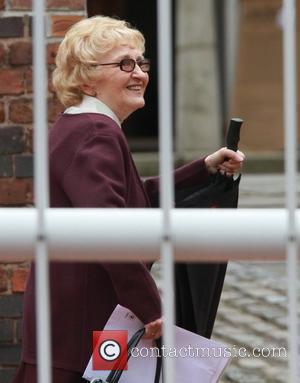 Eileen Derbyshire, the British actress best known for playing Coronation Street veteran 'Emily Bishop', accidently set herself on fire while shooting a scene for the soap's Bonfire Night episode. Derbyshire got too close to a candle and set the arm of her shawl alight, reports the UK's Daily Mirror.
Luckily, one of the production team noticed the flames and quickly sprinted over with a fire extinguisher. The 80-year-old was rushed to her dressing room and treated by a doctor while she calmed down. A source on-set said, "It was a scary moment for Eileen. She got too close to the tea-light candle and her clothes went up in flames. She was lucky someone on the crew acted so quickly. Thankfully, she didn't get burned but the costume was ruined so the scene had to be completely reshot". Eileen had been shooting a scene as part of the birthday celebrations for Brooke Vincent's character Sophie Webster. The source added, "It was hardly the biggest scene for November 5. There are others which have fires and fireworks in them so it's amazing this one caused such a problem".
A Coronation Street representative confirmed the incident, but claimed it was a "minor" fire and that nobody was in serious danger. Derbyshire first joined the cast of the soap in December 1960.