Classed as genre defying after the release of their Hudson Mohawke produced 2009 E.P 'Some Reptiles Grew Wings', the Manchester four piece seemed to have drifted away from each other since then, with lead singer Alex Hewett combining with Conan Mockasin and Charlotte Gainsbourg and the band offering little sign of any new material, until now. 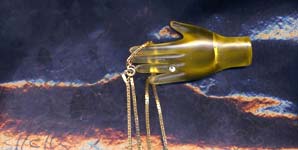 The sudden release of the single 'SYH' in August 2012 was shortly followed by an announcement for the autumn release of debut album 'Good Dont Sleep'. 'SYH' opens with a synthesised bass line occupying the seemingly effortless groove that was ever present on their original E.P. Cymbals click around the moog like synths that join the mix whilst wailing vocals echo sensually; it is clear that Egyptian Hip Hop have pushed their sound in a different direction over the past three years and, if the single is anything to judge by, we're in for an intriguing experience.

Opening track 'Tobago' begins with the same three notes that loop throughout, providing a base for intricate guitar parts and reverb laden vocals to drift smoothly, seemingly carelessly on top, yet you also get the sense that the part of each instrument has been perfectly crafted to compliment the rest of the mix. Tracks like 'Alalon' and 'Strange Vale' are highly synthesiser orientated with dreamy chords and gentle drones floating underneath, similar to the electronic vibes of 'Washed Out' or 'Toro Y Moi'.

Fourth track 'Yoro Dialo' offers a more stripped down approach - at least compared to the rest of the album - with vocals in which the lyrics are recognisable and can be distinguished from the rest of the instrumentation, whilst being sufficiently chilled to fit with the tone of the album. The verses lead into an uplifting chorus in which Egyptian Hip Hop's sturdy pop influences shine through. In 'One Eyed King', largely an instrumental build up with percussion gradually intensifying and synth pads slowly growing and eventually merging with Alex Hewett's gentle vocal moan, it is clear that EHH have matured musically with subtle bass parts and layered synths creating a wall of sound effect.

With 'Good Dont Sleep', Egyptian Hip Hop could have stuck with the upbeat pop that gained them so much attention after their four track E.P in 2009, but instead of leaping into what would have been a rushed debut album, they have obviously spent time thinking about their sound and it has served them well. 'Good Dont Sleep' offers moments of brilliance and although a couple of tracks don't quite meet the general standard, it is clear that EHH have pushed themselves in terms of experimenting with different soundscapes and concepts whilst keeping a consistent level of pop sensibility throughout.