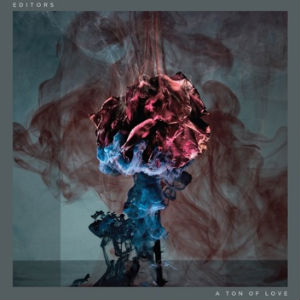 Editors debuted their new single, 'A Ton Of Love' tonight on Radio One as Zane Lowe's 'Hottest Record In The World'. The single is released on 24th June and is taken from the band's fourth studio album, 'The Weight Of Your Love', released worldwide by Play It Again Sam on July 1st.

'The Weight Of Your Love' is the follow up to Editors two consecutive Number One UK Albums, 2007s 'An End Has A Start' and 2009s 'In This Light And On This Evening'. Their debut album, 2005s 'The Back Room' has sold over half a million copies in the UK. It is the first album to feature new members Justin Lockey and Elliott Williams following the departure of founding member Chris Urbanowicz in 2012. It was recorded at Blackbird Studio in Nashville with producer Jacquire King (Tom Waits, Norah Jones, Of Monsters And Men, Kings Of Leon) and mixed by Craig Silvey (Arctic Monkeys, The Horrors, Arcade Fire, Bon Iver).

Tom Smith has described 'The Weight Of Your Love' as 'having a foot in that alt rock / Americana world' and of 'feeling untouchable at times'. Recorded mostly live, it contains their most direct songs to date and also features extra production from Clint Mansell on 'Nothing', rescored from the original to become what Tom and Ed Lay both describe as the 'centrepiece' of the album. Lyrically focused on 'love songs...that don't adhere to the traditional love song type', the album sees Tom Smith sing in falsetto for the first time on 'What Is This Thing Called Love'.

Editors make a series of high profile festival performances across the summer, including headlining slots at Belgium's Werchter Festival, Lowlands in Holland and major appearances at 25 festivals across Europe. In the UK the band play prestigious slots at Glastonbury Festival, T In The Park and Reading and Leeds.

'A Ton Of Love' is available as a download from midnight on 6th May when pre-ordering 'The Weight Of Your Love' at iTunes. The single is released on 7" on 24th June with live favourite 'The Sting' on the reverse.

The Weight Of Your Love' is released by Play It Again Sam on 1st July on cd, double cd (with extra tracks), double heavyweight vinyl and digital download.

Listen to 'A Ton Of Love' here: