Editors - Push Your Head Towards The Air Single Review

Review of Push Your Head Towards The Air Single by Editors

Editors
Push Your Head Towards The Air
Single Review 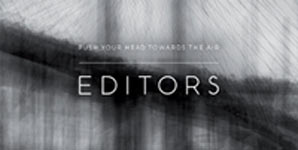 'Tom Smith is God' proclaimed the pin badges when Editors first broke. Tongue in cheek perhaps, but surely an element of truth. As an album An End Has A Start builds on the genius of the Back Room, offering a warmer, more rounded take on the stark beauty the Editors have to offer.

PYHTTA is the fourth single from the second album, and is a much mellower, slower tempo affair than its predecessors. A beautiful, tender song it is, driven by piano and strings, but this is not really what Editors are truly best at. For 'Bones' to be overlooked as single number four is a real pity. Having said this, complaining about the release of this track as a single is rather like being given a block of gold for free and moaning that it's a bit heavy and the edges are sharp. Tom Smith is God, and he's got three good angels with him.