Is 'The Theory Of Everything' Star Eddie Redmayne Set For Oscar Glory On Sunday?

Redmayne faces stiff competition in the Best Actor category, but does his performance as Stephen Hawking make him a shoe-in for success?

He’ll be up against fellow Brit Benedict Cumberbatch, as well as Steve Carrell, Bradley Cooper and veteran Michael Keaton, but according to observers Eddie Redmayne has emerged as the safest bet to take home the best actor Oscar on Sunday evening. 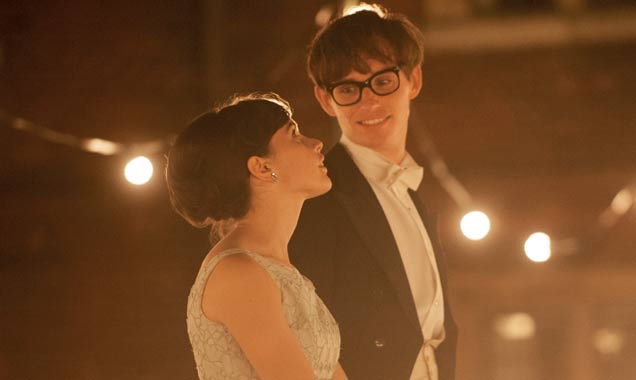 Redmayne opposite fellow nominee Felicity Jones in The Theory Of Everything

The British actor has wowed the critics with his performance as physicist Stephen Hawking in The Theory Of Everything, which has already earned him a BAFTA, a Golden Globe and a Screen Actor's Guild award. But Redmayne’s greatest honour could come on Sunday, if he walks off with the coveted golden statue.

The Theory of Everything follows Hawking’s relationship with first wife Jane Wilde (played by Felicity Jones) and is based on her memoir Travelling to Infinity: My Life with Stephen. The movie also charts the physicist’s battle with ALS from his time at Cambridge University to the publication of his most famous work, A Brief History of Time.

The film itself is nominated in the best picture category, while co-star Felicity Jones is in the running for best actress, going up against Gone Girl's Rosamund Pike, Reese Witherspoon, Julianne Moore and Marion Cotillard.

But while Redmayne’s BAFTA and Golden Globes wins have made him the hot contender ahead of Sunday’s ceremony, for many back home in Britain it’s a tough choice between the 33 year old and his fellow countryman Benedict Cumberbatch.

Like Redmayne, Cumberbatch has also received his first Academy Award nomination this year, for his portrayal of a real life figure, World War II codebreaker Alan Turing in The Imitation Game.

But whoever wins, there’s no hard feelings between the two, as Redmayne told Britain’s Daily Star newspaper, “We are old, old friends. I think he is the most staggering actor and wonderful human being. Our films are completely different and hopefully there is room for both of us.”

Sunday’s ceremony sees a total of five British nominees in the acting categories alongside Redmayne and Cumberbatch. As well as the two actors, Cumberbatch's co-star Keira Knightly is nominated for best supporting actress, while Rosamund Pike and Felicity Jones each have nods in the best actress category.