The Oscar nominated actor sat down with Jimmy Kimmel and dished on his first meeting with the ‘Friends’ star.

He’s just picked up a SAG award for his performance in The Theory of Everything and an Oscar could be next, but Eddie Redmayne still finds himself getting starstruck in Hollywood. Appearing on Tuesday night’s edition of 'Jimmy Kimmel Live', the British actor described mingling with Tinseltown’s elite at award shows as, "completely surreal” and "endlessly exciting”. 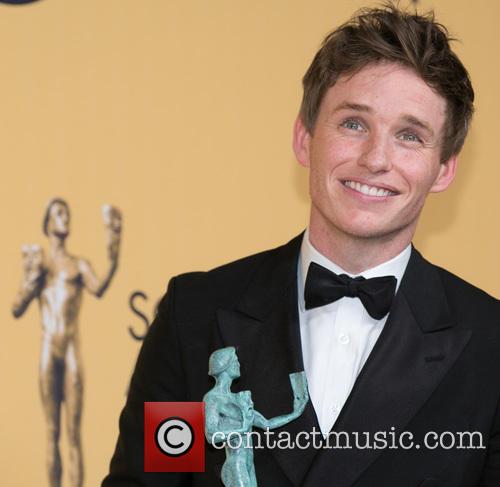 Eddie Redmayne, after collecting his SAG award for The Theory of Everything

The 33 year old actor said he feels "like a kid in a candy store” when attending all the glitzy Hollywood award shows, admitting that it still feels "completely surreal" to come face to face with "all these people you've long admired.”

One recent encounter that Redmayne found particularly exciting was when Julia Roberts presented him with his Best Actor trophy at the SAG Awards this past weekend.

"My dad's favourite film is Pretty Woman, so I think as a kid, at a pretty inappropriate age, I was watching Pretty Woman," the actor began.

"So, this moment happens when your name gets read out and it's such an extraordinary euphoria and it's kind of white noise and it all kind of goes into a blur, and then suddenly, there I was sort of hugging Julia Roberts, and then I was meant to be articulate. All I could think of was, 'I want to tell my dad!’”

Redmayne then described the experience as ‘amazing’ and added that he and his father, "had a long conversation afterward."

But while having one of your favourite actress’ present you with an award is a perfectly legitimate way to meet them, when it came to Jennifer Aniston, Redmayne and his wife Hannah Bagshaw took more (ahem) extreme action.

"My wife and I love Friends,” Redmayne told Kimmel. "We saw Jennifer Aniston at a party and we were just incredibly inappropriate. We so wanted to meet her that we sort of literally stalked about four meters behind her for an entire evening.”

"Eventually I think she was like, 'Okay!'" he added. "So we got to meet her and she was as beautiful and wonderful as you'd expect her to be... She could've turned around and slapped us for being stalkers."