Eddie Redmayne ''stuffed [his] face'' with food during filming for Tom Hooper's 'Les Miserables' while his co-stars slaved away in the gym. 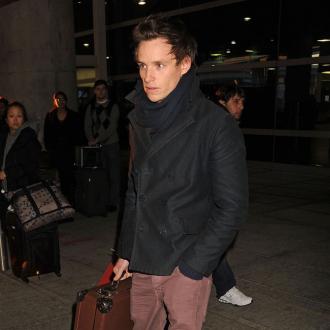 The 31-year-old hunk - who plays love-struck Marius in Tom Hooper's Academy Award-nominated musical drama - was grateful for his naturally slim frame as it meant he could avoid the gym and the dramatic weight-loss regime his fellow stars Anne Hathaway and Hugh Jackman endured for their roles.

He told Britain's OK! magazine: ''I'm going to be totally honest. I remember sitting in rehearsals with Tom Hooper, the director, and he'd be like: 'Where is everyone?' and I'd be like: 'They're all in the gym!' He'd be like: 'Aren't you the romantic lead, shouldn't you...?' I'm like, 'Yeah'.

''What I found amazing, for this troupe of people who were all losing weight, I've never seen so much food being brought on set. When you do one of these things, they make you eat constantly throughout the day. It was amazing to watch while I stuffed my face!''

The actor jumped at the chance to star in the big screen adaptation of the musical based on Victor Hugo's classic novel because he had seen a production as a young boy and it made him feel like a ''rock star''.

Eddie explained: ''I first saw this when I was seven or eight and I saw the character Gavroche, the urchin. He was basically everything I wanted to be. I thought he was a complete rock star and I wanted to be him.

''When I heard that they were making a film, I jumped at the opportunity.''