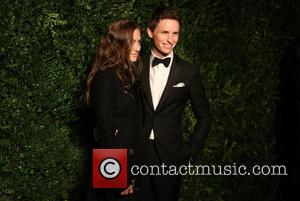 Picture: Eddie Redmayne and Hannah Bagshawe - Shots of a host of stars as they took to the red carpet for the 60th London Evening Standard...

The two Brits took part in a recent actors roundtable chat for The Hollywood Reporter and discussed their links to the brilliant physicist, but Redmayne confessed he didn't check out his friend's performance in 2004 Tv movie Hawking.

He says, "I had to make a quite hardcore decision about whether to watch it. Ben is an old friend and I'd heard it was extraordinary.

"I thought long and hard about it and decided not to (watch Hawking) purely because I thought I'd try and steal his best bits."

Meanwhile, Cumberbatch confessed he was fascinated by the idea of having to play a man ravaged with multiple sclerosis.

He adds, "I remember being fascinated by the idea of having to face up to something which, in most cases, is a two-to-three-year life sentence. You know you're locked into a body that's quickly degenerating."