Eddie Redmayne hopes audiences will see all sides of Hawking's personality in the biopic.

Eddie Redmayne, speaking about his new film 'The Theory of Everything', was quick to put out just how important Stephen Hawking is, not that anyone needed telling. As perhaps the biggest science icon of the modern day, you don't have to be a keen New Scientist reader to be overwhelmed with respect for him. 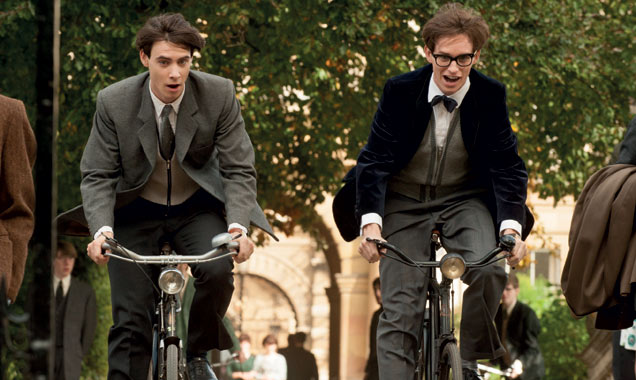 Harry Lloyd stars alongside Eddie Redmayne in 'The Theory Of Everything'

While a lot of work went into taking on such a recognisable character, from vocal work to physical training and voracious studying of motor neuron disease, the most difficult task for Eddie Redmayne was encompassing Stephen Hawking's remarkable personality. 'The astounding thing is that Stephen Hawking was given 2 years to live aged 21 and he's now 72', Eddie marvels. 'I mean, it's against all odds and it's a staggering thing, and whether it's to do with his passion, his drive, his outlook on life, his humour or the specific strain of what the disease is, no-one knows but it's a staggering thing and it's a great, great icon of hope.'

An 'icon' is both an appropriate and yet still insubstantial way to describe Hawking; indeed his miraculous story and his charm have captivated people all over the world. From being a promising young Oxford student, he has been struggling with a debilitating disease that has left him virtually paralysed and totally mute - but his story of struggles and falling in love resonates with many.

Watch the trailer for 'The Theory Of Everything' here:


Hollywood is slowly falling in love with 'Les Miserables' actor Redmayne, but is he the best man to encapsulate the legend that surrounds him? He certainly hopes so. 'I hope you see sides of his personality - his humour, his wit, his complications and stubbornness - all these things that make someone live a full life', he muses. 'At the age of 21 Stephen Hawking might've only been given 2 years to live but he's lived - and continues to - a very full life. I hope it'll be a story that's as inspiring to watch as it was for me to play.'

'The Theory Of Everything' hits the US on November 7th 2014.