He's in deep trouble with the American Ministry, however.

'Fantastic Beasts and Where to Find Them' follows the adventures of a young Newt Scamander in New York, accompanied by a case of magical creatures - many of which are incredibly dangerous. The new trailer doesn't give us many clues as to what dangers lie ahead, but if the US' Department of Magic is involved, it must be serious. 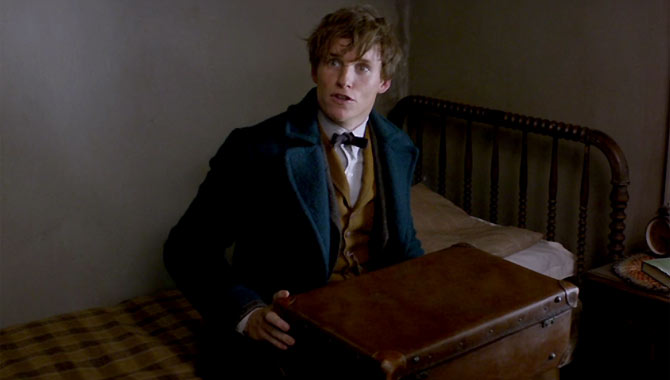 Probably best not to open that suitcase...

Indeed, Scamander hasn't been as careful as he should've been with his wild haul and several of the beasts inevitably escape. Those who have read JK Rowling's Comic Relief textbook of the same name will understand just how grave a situation New York finds itself in given some of the monsters that are listed. Nevermind dragons, hippogriffs and unicorns; the US could be facing a lot worse as this is a magical world that plays host to griffins, trolls, red caps and even dementor-lookalikes called Lethifolds.

Given that Newt Scamander - portrayed by Eddie Redmayne - is a decorated magizoologist, we can only assume that his talents in such a field will eventually bring peace to the city before too much major damage is done - after all, he didn't go on to win his Order of Merlin Second Class for nothing.

The movie has been written by JK Rowling herself, with trusted director of the last four Harry Potter films, David Yates, at the helm. It takes inspiration from Harry Potter's school reference book, which Rowling later re-created for her fans, though focuses instead on the little known early adventures of the author.

'Fantastic Beasts' will be released in the UK on November 18th 2016.