Eddie Redmayne has already forgotten what he said in his Oscars speech last night (22.02.15), describing it as a ''frenzied blur''. 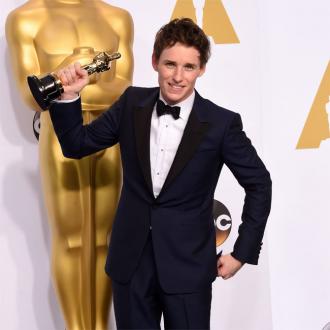 The 33-year-old star picked up the Best Actor prize at the Academy Awards for his portrayal of physicist Stephen Hawking in 'The Theory of Everything', but just hours after taking to the stage to collect the prize at Los Angeles' Dolby Theater he admitted his thank you speech felt like a ''frenzied blur''.

When told his speech, which he dedicated to people who, like Stephen, suffer from amyotrophic lateral sclerosis (ALS) - also known as motor neurone disease - had people in tears, he told ITV's 'Good Morning Britain': ''I can't remember it at all, I just remember it being a sort of frenzied blur, but thank you.

''It's this extraordinary thing where you're lucky enough to tell a story like this, the amount of people involved that help make you be able to tell that story, there are always more people you need to thank.''

Eddie also paid tribute to everyone involved in the movie including his leading lady Felicity Jones, who played Stephen's wife Jane, as well as his wife Hannah Bagshawe.

''This Oscar - wow! This Oscar, this belongs to all of those people around the world battling ALS. It belongs to one exceptional family: Stephen, Jane, Jonathan and the Hawking children.

''I will be its custodian and I will promise you I will look after him. I will polish him. I will answer his beck and call. I will wait on him hand and foot.

''But I would not be here were it not for an extraordinary troupe of people. My staggering partner in crime, Felicity Jones. My ferocious and yet incredibly kind director, James Marsh. Working Title, Focus, Lisa and Anthony, Nina and my ingenious team of Dallas, Josh, Gene, Jason, Elan, Carl, Britney and Carrie and Pip.

''Now, finally, please, this is so extraordinary. I just want to thank my family and you, Hannah, my wife. I love you so much. We have a new fellow coming to share our apartment. Thank you.''

Felicity later admitted she was clutching Hannah's hand and desperately hoping Cate Blanchett would read out his name as she prepared to announce the winner of the prestigious award.

The 31-year-old actress - who was nominated for Best Actress but lost out to Julianne Moore for 'Still Alice' - said: ''I got a bit nervous before because I thought, 'What if it doesn't happen?'

''Hannah and I, Eddie's wife, were just holding hands and hoping it would go his way so it was just brilliant.