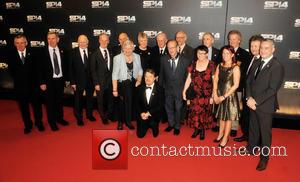 Picture: Eddie Izzard - Photographs from the red carpet at the BBC Sports Personality Of The Year Award 2014 an annual event held in the UK...

British comedian Eddie Izzard is campaigning against plans to transform a social housing block in London into luxury apartments.

The funnyman has followed in the steps of fellow comic Russell Brand by beginning a crusade against proposals to demolish a number of low-rent properties in the U.K. capital's affluent Chelsea area and replace them with high price homes.

Izzard tells Britain's The Guardian newspaper, "(The class system in Britain has) turned into a moneyocracy type of system where if you've got a lot of money you're fine, if you don't you're never going to get anywhere.

"(Affinity Sutton) seem to be doing social cleansing and this is wrong in this day and age... The separation of the rich and the poor does feel like it is happening here, and it can be stopped with the right legislation and encouragement for people in social housing and not squeeze out people on low incomes."

A spokesperson for Affinity Sutton explains, "The main objectors are in fact not our tenants, and we are concerned that they are causing distress through a campaign of deliberate misinformation. We reject outright the allegation that (the) redevelopment... is motivated by creating large profits."