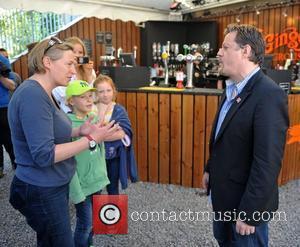 Picture: Eddie Izzard meets 10 year old Eddie Bloom and his family, who was named 'Eddie' after Eddie Izzard and they had a conversation about...

Actor Eddie Izzard saluted Great Britain's Olympic and Paralympic athletes at a celebratory parade through London on Monday (10Sep12).
The funnyman, who has been an ambassador for the 2012 Games, joined the estimated one million people who lined the streets of the U.K. capital to wave at their sporting heroes as they passed by on floats.
Classical singer Katherine Jenkins showed up to sing the National Anthem outside Buckingham Palace, while Izzard posed for photos with volunteers who worked behind the scenes.
He also urged politicians to make the most of the positive energy the Olympics has generated in the U.K. this summer (12).
Izzard told reporters, "We must bottle this spirit because with this spirit you can change the world. You can, politically, change the world with this because this exists in every country - this positive, can-do, let's think out of the box (attitude). It's there in every country, it's not just us. We bottle this, we take this, (then) we can maybe get to the world we wanna (sic) get to."
The Valkyrie star served as an official torchbearer for the Olympics in July (12), carrying the flame through his hometown of Bexhill, England in the countdown to the London Games.