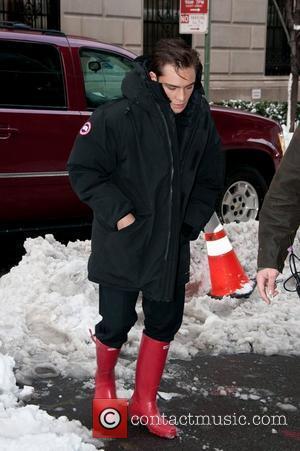 Picture: Ed Westwick on the set of Gossip Girl filmed in the Upper East Side of Manhattan. New York City, USA - 27.01.11

Ed Westwick has opened up about his failed relationship with Gossip Girl co-star Jessica Szohr.
ED WESTWICK, the 23-year-old actor, has discussed his relationship with the actress JESSICA SZHOR, claiming that it 'blossomed' and then 'wilted'.
In an interview with Tatler Magazine, Westwick said his breakup from Szohr had left him "kind of on a warpath". The couple reportedly split back in April 2010, and Westwick said, "Everyone's dated each other, and then broken up, or whatever. It's natural that romance would blossom. Blossom and then wilt. The wickedness of women! The heartbreakers, God damn them. I've learnt. And I feel stronger and wiser". The British actor is best known for playing 'Chuck Bass' on Gossip Girl, however, Westwick has revealed his desire to move on and play different roles, he said, "To be completely honest, I'm ready to do something else. Really ready to do something else".
Fans of Westwick will get the chance to see the actor play a new type of role when his latest movie 'Chalet Girl' hits screens in March 2011. The 23-year-old plays a rich boy who falls in love with a girl named 'Kim', played by FELICITY JONES.