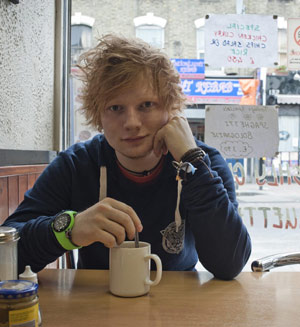 20-year-old singer songwriter, Ed Sheeran, has announced a string of live shows for early 2012. This follows a completely sold out 18-date tour in October of this year. The dates will begin at Edinburgh's Picture House on January 10, and include shows in Manchester and Wolverhampton before wrapping up with a Kilimanjaro Live Presents gig at Brixton's O2 Academy on January 20.

Before his signing to Asylum Records (part of Atlantic Records) in early 2011, Ed had already gained a loyal following by touring relentlessly and selling tens of thousands of copies of self released E.P's through his website, digital stores and out of his backpack at gigs. His 5th E.P, 'No.5 Collaborations', (featuring hip-hop and grime favourites: Devlin, Wretch 32 and Wiley to name a few) peaked at #2 in the iTunes chart within 24 hours of its release. The only artist selling more copies than Ed at the time was Rihanna. Since then, Ed has enjoyed great success with his debut single, 'The A Team', which has been sitting comfortably in side the Top 10 since its release in June, and a plethora of sold out shows including three consecutive homecoming gigs at Norwich's Waterfront.

Set to release his debut album, +, on September 12, the new single 'You Need Me, I Don't Need You', on August 29 and an upcoming sell out tour, the announcement of new shows prove that Ed is one of this year's most exciting breakthrough artists.