Ed Sheeran is working with rapper Game and dance group Rudimental, and the sessions were so fruitful they recorded six songs in two days. 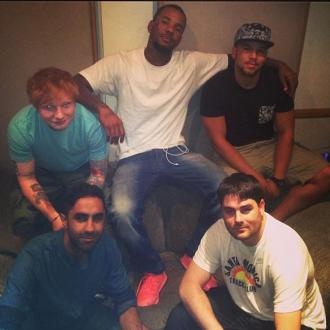 The 'Lego House' singer is currently recording the follow up to his debut album, '+', in Los Angeles where he had a ''nuts'' couple of days collaborating.

He wrote on Instagram: ''Another great day making music. This time me, the game and rudimental. Nuts (sic).''

He later added: ''6 songs done in 2 days with @RudimentalUk and @thegame. Awesome (sic)''

Game - who is a protege of Dr. Dre and is a former member of 50 Cent's G-Unit rap crew - was also impressed with the session, tweeting: ''Just made a Classic record with the homie Ed Sheeran...!!!!!!! One of the dopest sessions in my life (sic)''.

Rudimental also posted a picture from the session, with a caption saying ''Only in #LA!!''

Ed has previously said he's narrowed down 50 prospective tracks to 12 for his new album, but ruled out duetting with his friend Taylor Swift, who he is currently on a US tour with.