Ed Sheeran will perform his collaboration with Rudimental, 'Bloodstream', at the BRIT Awards on Wednesday (25.02.15). 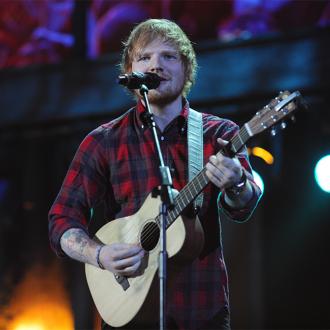 Ed Sheeran will perform 'Bloodstream' at the BRIT Awards.

The 24-year-old musician will sing at the annual ceremony tomorrow (25.02.15) and has accidentally revealed he will perform his new single.

After playing the track on BBC Radio 1 this morning (24.02.15), host Nick Grimshaw asked Ed what he would be performing, to which he replied: ''That! Yeah. Oh I probably shouldn't say that because it's meant to be a [secret].''

The singer-songwriter's latest track is a collaboration with drum and bass quartet Rudimental, and although he denied he would be singing with a band, he teased his performance may surprise viewers.

Meanwhile, the star - who is up for four awards at the BRITs - was in his hometown of Ipswich on Monday (23.02.15) filming the video for the song along with a group of school children.

Other performers set to grace the stage at the BRIT Awards at London's O2 Arena include Taylor Swift, Madonna, Sam Smith, George Ezra, Take That, Royal Blood and Paloma Faith.