British Singer Ed Sheeran Has Filmed A Cameo For The Third Bridget Jones Movie, According To A U.k. Report. 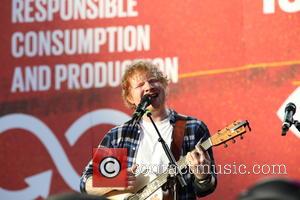 The Thinking Out Loud star has landed small roles in TV shows including Australian soap opera Home and Away and U.S. comedy Undateable, and he is now moving into films with a minor part in the upcoming comedy, currently titled Bridget Jones's Baby.

Filming on the third movie, which stars Renee Zellweger, reportedly began in July (15) at Ed's gig at Croke Park in Dublin, Ireland with Renee's body double, and it has now been revealed Ed managed to land a speaking role.

"Ed was really keen to be part of the movie after granting access to film at his gig," a source tells Britain's The Sun newspaper. "He's got experience playing himself in Home and Away and is not daunted by the prospect of starring alongside Renee. Bridget Jones is a huge British film so he feels nabbing a cameo is a bit of a coup... He just hopes he'll make the final cut."