Ed Sheeran has collaborated with Beats by Dr. Dre, starring in the brand's advert for its new Solo2 headphones. 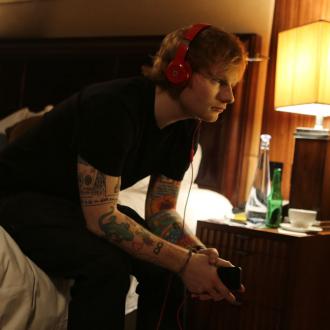 Ed Sheeran has collaborated with Beats by Dr. Dre.

The 'Sing' hitmaker is seen in the official advert for Beats' new Solo2 headphones and the commercial also features a new track called 'Don't', which is lifted from his eagerly awaited second album, 'x'.

The video chronicles the 23-year-old singer's reaction to the events that inspired the new song, which is about a cheating ex-lover.

The song has long been rumoured to be about fellow pop star Ellie Goulding.

The lyrics include: ''I never saw him as a threat, till you disappeared with him to have sex, and I'm downstairs at my party and you're upstairs doing that, that's disrespectful.''

Ed previously opened up about the track, admitting the lyrics are a lot tamer than what he could have written about his former girlfriend.

''I was seeing someone for a bit of time, and then they ended up physically involved with one of my friends in the same hotel that we were staying in, while I was downstairs. And I feel like, 'Treat people how you want to be treated.' ''

Watch the ad by visiting https://www.youtube.com/watch?v=1wZKyrq4jBM